If you want to know what the world thinks a professional chef looks like, a simple Google search of the word will flood your screen with images of Gordon Ramsay, Marcus Samuelsson, and David Chang, thanks to the celebrification of the culinary world over the past two decades. The word bartender, on the other hand, delivers a generic image of some mustachioed, apron-wearing individual miming shaking a cocktail, surrounded by a bunch of bottles. As it happens, that individual is me. (Seriously: rolled-up sleeves and an apron — what was I thinking?)

While that image has landed me in a couple of memes, I can still walk the streets of New York freely, unencumbered by recognition or fans asking for selfies. It’s a stark reminder of the diverging paths our two professions have taken over the last 20 years: Reach the top of your game as a chef and you might land a seven-figure Netflix deal. Achieve a similar fate as a bartender and you can comfortably settle down as… a brand ambassador or spirits company owner.

We’re closing in on 30 years since the Food Network launch party took place in New York’s Rainbow Room in November 1993. That very event is another sobering example of the contrasting fortunes of chefs and bartenders in the intervening years. The network would prove a catalyst for the idea of celebrity chef-dom — many in attendance that night would reach such a status. Meanwhile, the individual who was almost certainly tasked with creating and mixing the drinks that night was Dale Degroff, who is still arguably America’s most famous bartender.

So, when I heard the announcement for the reality show “Drink Masters” airing on Netflix Oct. 28, I was excited. The show is advertised as a world-class mixologist competition with innovative bartenders from around the world competing for a $100K prize and the title of “Ultimate Drink Master.”

This golden age of the cocktail has seen many in our industry put in their 10 thousand hours and who are as deserving of celebrity as anyone on “Dancing with the Stars.” Several of them will appear on “Drink Masters.” Which leads me to question: Could the show propel a bartender to the level of Gordon Ramsay or Rachael Ray? And if not, what will it take for a celebrity bartender to emerge?

Everybody Eats, Not Everybody Drinks

Since “Drink Masters” is trying to appeal to a larger audience, it’s essential to address the elephant in the room. While everyone has to eat, there are many reasons why a person might choose not to drink: health, religion, age, pregnancy, legal restrictions, stress management, allergies, because Chrissy Teigen said so, etc.

“Cocktails are a hobby and a passion, but not a necessity,” says Pamela Wiznitzer, a New York-based beverage consultant whose Instagram page blends cocktail recipes with Broadway show tunes.

Show someone a piece of chicken, and there is an emotional connection to that food, as well as an inherent understanding of how it tastes. Show a well-crafted cocktail to most people on Earth, however, and they have practically no frame of reference.

New York-based bartender, author of “I’m Just Here For the Drinks,” and onetime Food Network employee Sother Teague is well aware of this dilemma. He once pitched a drinking show to his former employer and was almost immediately turned down because of what he refers to as “the final scene.”

On a show about cocktails the host will end with a drink. But if the viewer has no idea about any of the ingredients used, they lose interest fast. “You [won’t] watch the host take a sip because you changed the channel long ago,” Teague says.

Let’s be honest: Food is also much more visually stimulating than drinks. A roasted chicken with steam coming off it is enticing, while a perfectly made Manhattan still looks like brown liquid in a glass.

That’s not to say there haven’t been some great bartender-hosted drinking shows that made it past the pitch. There was “Drink Up with Darryl Robinson” on the Cooking Channel, and “Cocktail Kings,” hosted by Colin Asare-Appiah and Dimitri Lezinska on Discovery Travel. Even early episodes of “Top Chef” and “Iron Chef” would have bartenders as guests.

My favorite, which I often credit with sparking my interest in spirits and cocktails, was “Three Sheets with Zane Lamprey,” a comedian and drinks enthusiast. It was a funny and informative travel show that focused on regional drinks and drinking customs and showed me how interesting the culture around spirits could be.

Shows like these with wholesome and entertaining explorations of beverage creation and consumption sadly fizzle away. Meanwhile, a show like “Bar Rescue,” which is more or less the bar version of Ramsay’s “Kitchen Nightmares,” thrives.

It shouldn’t be much of a surprise that the real draw to a show like this is the voyeuristic, trash TV ethos of picking on people. Cocktails aren’t at the heart of the show, which rubbed so many people in the bartending community the wrong way. Though, if we ask if there will ever be a bar celebrity, you could say host Jon Taffer is already it. (Not that anyone in the drinks industry wants to admit it.) But if he is not, what more will it take?

What Does It Take to Become a Celebrity

According to some industry sources, the main quality needed to become a celebrity bartender is the ability to connect with consumers. Wiznitzer explains that anyone can teach you how to make an Old Fashioned, yet “not everybody can connect with a consumer and make them want to make that Old Fashioned — and I think that’s the twist.”

We are no longer in a world where mass-market outlets with access to network airtime are the only food and beverage entertainment sources, it’s worth noting. In recent years, social media has been able to level the playing field somewhat. Look at “How to Drink” on YouTube, which has 1.59 million subscribers. Host Greg Titain, a content creator, is among the growing number of social-media-famous drinks creators who are not bartenders. (Most don’t even claim to be bartenders.) It’s a strange world where we’ve given authority to figures who’ve never practiced it but that’s also the nature of modern platforms.

Yet, what these creators do is connect with the audience and make them want to make that cocktail — call it Wiznitzer’s plot twist. In some respects, they hold the advantage of not being in the industry. They have the time and resources that are required to succeed in the Instagram and TikTok era. Titain’s videos often run 30 minutes, which doesn’t sound like a lot, but he also has to edit, promote, and engage with his viewers. Meanwhile, the average bartender and chef is already taxed on the time front. What’s more, the work is physically taxing, as anyone who’s been employed in hospitality can attest.

“The time I’m off, I’m pretty tired, and if I don’t have a studio, a camera, or a quiet place to do the thing. What are my options?” says Teague. “When can I get the content created that I need to have created so that I can get it out there so that I can hopefully become famous one day?”

The Nature of Celebrity Is Changing

The popularity of social media platforms like Instagram, YouTube, and TikTok means we might not have to solve the problem of how a bartender-led cocktail show can appeal to general audiences. “The mass market concept is just dying,” says Chris Lowder, co-founder of the global hospitality firm LTH and the creator of some viral TikTok videos. 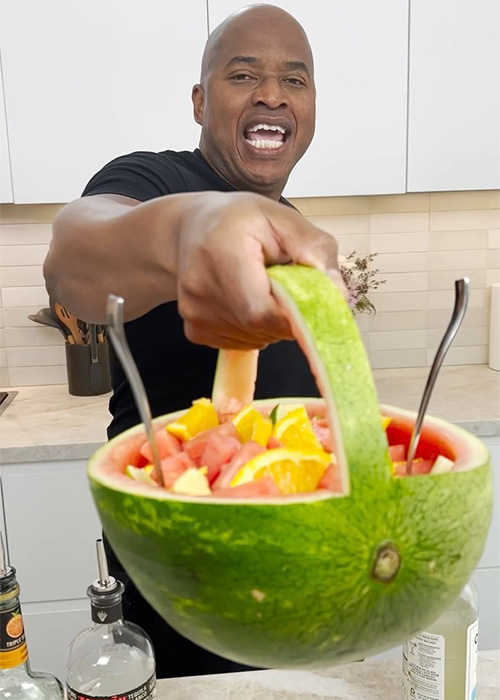 The algorithm that TikTok uses (and Instagram is rapidly trying to duplicate) ensures that content gets served to the people who will find it interesting instead of just niche circles. “You don’t have to be a fancy celebrity. You only need to be inspiring, informative, and entertaining,” Lowder says. “If you are any of those three things, you can just go for it.”

In September, Lowder created a TikTok video that, with 2.3 million views, was arguably the most consumed piece of educational tequila content at the time. In the video, he breaks down the flavor differences between tequila and mezcal, where it’s made, and how it is distilled, all in under two minutes.

There are other content creators and educators out there who have even higher, almost rap-star levels of engagement. There is TipsyBartender, whose 7.5 million followers on TikTok puts his content in front of almost as many people as Jack Black. Or Beauty.And.The.Booze and BadBirdy, whose interactions are in the tens of thousands. Or Jemimajune, whose livestreamed shifts making Vodka Redbulls at a busy Nashville bar reach hundreds of thousands of viewers.

None of these influential drinks creators feature on Drinks International’s Bar Worlds 100 Most Influential Bartenders list. Yet, viewed purely in numerical terms, there are already bonafide celebrities with better levels of interaction than they may gain on network television. If bartenders want to reach a broader range of consumers, we will need to meet people where they are, which means on these platforms.

Interestingly, success on social media can catapult individuals onto the small screen — if only for a hot minute. That bartender from Nashville? She was on “Late Night with Jimmy Fallon” not long ago. That achievement went largely unnoticed and decidedly uncelebrated within the craft bartending community. If it was someone within our niche circle, I am sure it would have been a different story.

So what will be the fate of the winner of “Drink Masters”? Will this individual suddenly be propelled to the level of celebrity where they’ll receive cold calls from Ice-T and Steve Austin?

I don’t remember the names of the winners of “Blown Away,” a competitive glass-blowing show that the makers of “Drink Masters” created before this one. I did, however, learn a lot about the craft and skill that go into creating works of art with glass. Perhaps that’s the best possible outcome for this new show.

If “Drink Masters” creates a better understanding of the ingredients we use behind the bar, and what it is like to be a bartender, then I look forward to this show. At the very least, it deservedly introduces Julie Reiner, a judge on the show and respected bar mentor, as a drinks industry icon and educator to a broader audience than before. But better still, it might ignite a spark in someone that translates into a rewarding career in spirits and beverage, like “Three Sheets” did for me. Who knows? That same individual may even one day usurp my position as the first Google search result for the term “bartender.”