In 1987, the United States Supreme Court took on what would become one of the country’s most famous First Amendment cases after a series of lengthy court battles that began with a raunchy parody of an advertising campaign run by Campari.

In Hustler Magazine, Inc. v. Falwell, the infamous and often maligned publisher Larry Flynt brought an action against Jerry Falwell Sr., a Baptist minister and leader of the Moral Majority, on the basis of freedom of speech.

Before the feud began, Flynt, a frequent target of Falwell’s ire for years, decided to fight back by featuring the minister in a 1983 issue of Hustler. At the time, a popular series of Campari ads featured celebrities cheekily reminiscing about their “first time” drinking the Italian aperitif.

While the ad’s slogan, “You’ll never forget your first time,” was meant as an obvious double entendre, Hustler’s crude satire depicted Falwell describing his first sexual encounter involving his mother, a goat, and an outhouse. 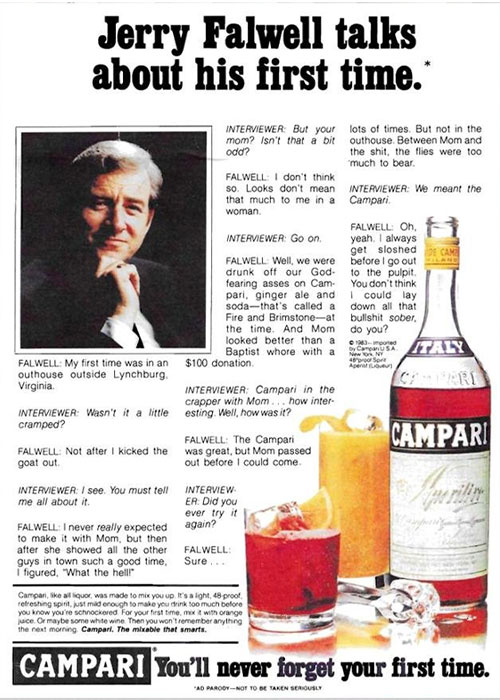 As Flynt wrote in a 2007 Los Angeles Times article, “After several years of listening to [Falwell] bash me and reading his insults, I decided it was time to start poking some fun at him.” Despite the ad’s disclaimer that read “Ad Parody — Not To Be Taken Seriously,” Falwell was not amused and sued the magazine for libel and intentional infliction of personal distress.

Hustler lost the initial case and two subsequent appeals. Undaunted by these initial setbacks and determined not to pay Falwell’s jury award of $200,000, Flynt also described being motivated by the constitutional significance of the case, writing, “As we had moved up the judicial ladder, this case had become much more than just a personal battle between a pornographer and a preacher, because the First Amendment was so much at the heart of the case.”

Flynt appealed his latest defeat to the country’s highest court. To his great surprise, they agreed to take it on.

In a unanimous 8-0 decision, the Supreme Court ruled in favor of Hustler Magazine, defending its right to parody public figures under the First Amendment. Despite the decision, the court would describe the ad as “doubtless gross and repugnant in the eyes of most.”

“Everyone was shocked at our victory — and no one more so than Falwell, who on the day of the decision called me a ‘sleaze merchant’ hiding behind the First Amendment. Still, over time, Falwell was forced to publicly come to grips with the reality that this is America, where you can make fun of anyone you want,” Flynt wrote.

While some saw the ruling as an important moment in the country’s legal history, others felt that Flynt had been unfairly hailed as a “champion of the First Amendment,” especially during his portrayal in the 1996 drama, “The People vs. Larry Flynt.”

Despite the controversy that surrounded the unprecedented case, Flynt and Falwell managed to add an even stranger, albeit more congenial, twist to the saga by becoming friends prior to the minister’s death in 2007.