A hundred and six steps below the Maison Charles Heidsieck in the city of Reims lies a vast underground world. The crayères — a network of cavernous chambers hewn from ancient Gallo-Romain quarries — is the prized place for aging Champagnes in perfect conditions (dark, humid, and a constant 10 degrees Celsius).

Today these crayères are home to Charles Heidsieck’s cellars. The historic house was started by Champagne Charlie, the man credited with introducing Champagne to America (among other things). In 1867, Charles Heidsieck made a fortuitous decision to buy his very own chalk galleries. Today the grande marque Maison is one of only five Champagne houses to own cellars in the crayères — named a UNESCO World Heritage site in 2015. “The Brut Réserve stands high above its competition with an average of 40 percent reserve wine in each blend, spanning eight to 15 years of age before secondary fermentation in bottle for an additional three to four years,” Justin Timsit, Advanced Sommelier and former wine director at Gramercy Tavern in NYC, says. “At $60 retail, the Brut Réserve from Charles Heidsieck is without question the best-value signature house cuvée in all of Champagne.” To fete the 150th anniversary of the crayères purchase, the Maison pulled out all the stops. Tristan Auer, Hotel de Crillon designer and MAISON&OBJET designer of the year,  renovated the Art Deco Charles Pavilion, with black-and-white leather armchairs, sofas in Angora goat mohair velvet, and panels of brushed cedar conjuring wooden Champagne boxes. The walls are as white as the chalky crayères, and enormous bay windows frame views of the majestic garden, dotted with centuries-old trees. Complete with a fountain dedicated to Bacchus, the five-acre garden is a privileged pocket of verdure in the very heart of Reims. This too was given a new lease on life by landscape architect Eric Lequertier, who created a new garden promenade fragrant with 200 flower varieties. At night, the soaring trees are illuminated to stunning effect. 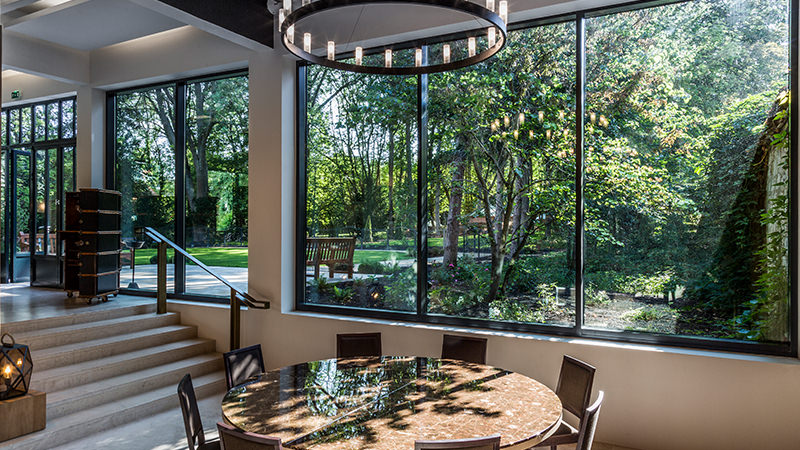 The celebration continues with the year-end launch of a collection of rare vintages, known as “The Crayères Collection.” This is the first time that the house will release these aged wines directly from their oenothèque, including five prestigious cuvées: 1985 Rosé Millésime; 1983 Brut Millésime in magnum; 1985 Champagne Charlie; 1982 Champagne Charlie in magnum; and 1981 Cuvée Royale.