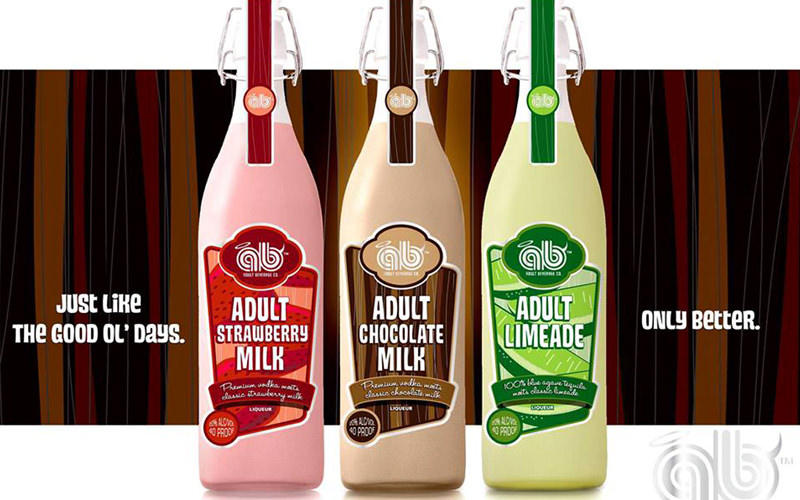 2017 has gotten off to a rough start. And in the midst of trying to stay ahead of the news — real and fake — and preparing a well-stocked apocalypse bunker if and when things go ridiculously south (we recommend lots of booze and cheese), you may have found yourself (understandably!) craving a little bit of childhood nostalgia. Ideally, spiked childhood nostalgia (the best kind always is). What could be more comforting and nostalgic than “Adult Chocolate Milk”? No, it’s not fortified with extra calcium to prevent osteoporosis. The “Adult” here refers to the drink’s delightfully unexpected vodka base. No doubt the Nesquik rabbit would be horrified.

We’re not making this up! Not only did Adult Chocolate Milk exist, but it was once repped by none other than Ginuwine.

For those of you who don’t know who Ginuwine is, well, first of all, our condolences. But if you’ve never heard of him, he’s the ’90s R&B genius behind “Pony,” the only small horse/sex metaphor slow jam ever created. Parks & Recreation fans will also know him as the cousin of Donna Meagle, queen of “Treat Yo’self.” And while those are some serious accomplishments, from now on, we will always think of Ginuwine as the sexy, sultry face behind a booze-laced chocolate milk on a billboard.

You might be wondering, how the hell did something called “Adult Chocolate Milk” come about? If we’re being honest, we can all probably admit to trying to spike chocolate milk at some point in our lives (quick heads up: Yohoo and bourbon don’t mix). And, it turns out, we’re not alone! Like most deliciously unexpected alcoholic concoctions, this one comes from the slightly risky territory of “after-hours curiosity.”

We all know that moms and dads tend to finish their kids’ food, mostly since it’s the only time they get to ingest actual nutrients. But when Tracy Reinhardt of Newport Beach, Calif., was staring down her kids’ leftover chocolate milk one night, it just didn’t seem…naughty enough. Maybe it had been a long day, or maybe Reinhardt just needed a bit more kick than dairy and cocoa can provide. Either way, she came up with an ingenious solution: She added vodka. And it actually tasted good.

A little well-deserved Facebook bragging about the drink actually spurred a lot of unexpected interest in Reinhardt’s concoction, and reconnected her with a former high school friend, Nikki Halbur. The two started serving the drink at parties. They got such a great reception (it’s delicious chocolate milk that helps you forget, folks) that they eventually formed a company to sell the stuff, Adult Beverage Co. The tagline, next to which our buddy Ginuwine stands while dressed as the sexiest milkman alive, reads “Re-taste Your Youth at 40 Proof.” Forty proof qualifies Adult Chocolate Milk as a lower ABV liqueur, not liquor (40 proof  means 20 percent ABV).

This is all incredibly delightful. Maybe it shouldn’t be so surprising, given Ginuwine’s love of ponies, that he ended up as a sensual brand ambassador for chocolate milk. Or that his love of the stuff didn’t stop at billboards. Check out his video for “Drink of Choice” if you want to see both blatant product placement and Ginuwine dancing on a bar. Which, yes, please.

Ginuwine wasn’t even the first celebrity who supported the sinful milk. Patti LaBelle and even Ciroc mogul P Diddy himself were fans. And apparently the success of Adult Chocolate Milk six years ago is the same reason we’re craving it now. According to Halbur, back in 2011, “these days, especially with the state of the economy, people want to go back to a time when they felt good and comforted, which for many is their childhood.”

Sadly, it’s unclear whether you’ll actually be able to find Adult Chocolate Milk at a liquor store near you. There are some random offerings if you search online, but the general sense is the stuff has been discontinued. Maybe because, for some crazy reason, the producers thought, “Hey, everything’s gonna be fine! Nobody needs boozy chocolate milk anymore!” Sigh.

That said, there are plenty of recipes online, if you just Google “adult chocolate milk,” which again, is proof that we all might be craving some spiked cocoa comfort. Just don’t forget to play Ginuwine’s tribute to Li’l Sebastian while you’re sipping. Trust us.