See our 2019 ranking of the best summer beers here!

Beer is a four-season sport, but certain brews are best suited to summer months. Crisp lagers quench your thirst, sours and IPAs cut through the heat, and pale ales are as bright and beautiful as a summer Friday.

For our annual ranking of the year’s best summer beers, VinePair polled a panel of industry experts. After much discussion, we decided to dedicate our list to all the beers that epitomize summer, instead of limiting our list to new releases. Narragansett lager and Del’s Lemonade, two quintessential Rhode Island exports, come together in smartly designed tallboys. They’re fun, uncomplicated, and a little trashy, in a great way. “It tastes like how crashing a party in your neighbor’s backyard feels,” one taster said. In the days before local beer was available on every corner in many neighborhoods, Bell’s Oberon signaled summer. The soft, light-bodied wheat ale has a touch of fruit and spice character thanks to a Bell’s house yeast strain, but remains simple and bright as a happy summer day. Velvety smooth, light-bodied, and subtly tart, this blackcurrant-dosed ruby brew shows off a sexy side of cream ale. A solid standby in any season, Maduro is a great choice when you’re looking for a dark-hued barbecue beer (try pairing it with some saucy ribs). Silky and roasty with a bit of chocolate sweetness, it somehow remains beautifully sessionable. A contemporary take on the traditional amber ale, Modern Times’ Blazing World throws a heavy hand of Nelson Sauvin, Simcoe, and Mosaic hop varietals into the mix with bread-like malt flavor. Dank and deliciously bitter with a lush, umami body, this is American amber at its best. Light-bodied and low in alcohol while still bringing flavors of grain and a touch of hop-imparted citrus, table beers like Sif are a breed we need more of come summertime. Sif is named for a Norse goddess with golden hair — the beer uses a Nordic ale yeast and pours a hazy gold-colored hue. Dank and sessionable, this pale ale is dry-hopped with a bouquet of Centennial, Cascade, and Comet. Flavorful and easy-drinking, it inspired one taster to say, “This is what I want to drink all the time.” Bright and spritzy enough to quench summertime thirsts, this seasonal release has lovely, herbaceous hops and a crisp, clean finish. Newly available in cans, this grisette-style farmhouse ale is one of the core beers from Denver’s metal-loving TRVE. “It almost reminds me of Champagne,” one taster said, praising its crisp finish and food friendliness. Is it hyped? Yes. Do we actually, legitimately like it? Also yes. This craft lager from California’s Firestone Walker is a gentle companion. We are all for pillowy, flavorful lagers that go down easy and pleasing. This is peak gose. The pucker is real but balanced, and the salt makes everything feel like a day at the beach, as one taster said, “even if you’re just popping cans on your fire escape.” (This taster lives in New York City.) Fermented in French oak with pitted peaches, and barrel conditioned for up to six months, this is a sour sour ale. It’s insanely refreshing and “just what you want on a sticky, humid evening,” one taster said. A good pilsner is the hallmark of a quality brewery and a staple in every season. This one from Troegs is an old favorite we find new love for each year. With low-key 4.5 percent ABV, this golden lager has notes of straw, grass, and the faintest hint of citrus. Dank pine meets bright citrus on the nose of this American pale ale, which is easy-drinking enough to crush (ABV is 6 percent) but has nuance to savor. If you like corn chips, you’ll love this crisp Mexican-style lager with a malty, crackery finish reminiscent of Fritos in the best way. Made with pilsner malt, flaked corn, and lager yeast, it is easy-drinking all the way. From Atlanta’s Monday Night Brewing comes this quadruple dry-hopped IPA. Dank and cloudy, with a gently bitter finish, it’s “extremely crushable,” belying its 8.5 percent  ABV. It’s also part of the brewery’s limited-release Black Tie Series, so grab this one when you can. If ever there were a summer porter, Maui’s is it. The Hawaii-based company combines the roasty toasty goodness of coconut and chocolatey malt in a light-bodied dark ale that’s flavorful and warm-weather friendly. A bright pink hit of hibiscus and tropical tea, this Berliner weisse is a refreshing, drinkable bouquet of flowers and fruits with just the right amount of tartness. An American farmhouse ale in all its hazy glory, this hoppy saison gives off banana chip aroma, subdued Belgian yeast-derived fruit flavors, and a finishing hint of bitterness. It’s also the most refreshing saison of the season, and currently in limited release. In a sea of pink chaos — rosé-flavored gin, anyone? — Crooked Stave’s Petite Sour Rosé makes sense. A wild ale aged in oak with grape skins, it uses the fruit to provide balanced complexity and tang. “It’s interesting, and I don’t mean that in a bad way,” one taster said. Easy-breezy carbonation makes it refreshing and food-friendly. A crystal pilsner made with Czech yeast, Twisted Fish is everything you need on a hot summer day. “Quite possibly the most refreshing pilsner I’ve had in ages,” one taster said. “Just so so good.” As an added bonus, $1 of every case sold goes to the Building Conservation Trust to support clean water. “Imagine it’s raining, only the raindrops are delicate little hops, and there’s a rainbow on the horizon,” mused one taster. Juicy citrus and some tropical fruit notes are balanced by a flavorful array of hops and malt in this dry-hopped IPA. 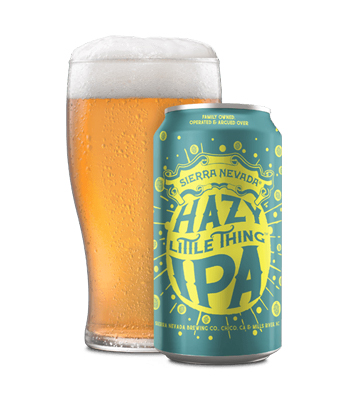 It may not call itself a New England-style IPA, but this “hazy little thing” checks all the boxes. It’s bold and juicy, and just the thing for a hot afternoon. It also topped our list of hazy IPAs with national distribution. The brightest, easiest-drinking option in Two Roads’ excellent Tanker Truck Series line, this gose uses fresh Moroccan clementines from a nearby Connecticut juicery, bringing thirst-quenching citrus with backyard-friendly chuggability. Goses can be divisive, but our panel was uniformly impressed by this one. “I could crush this all day,” one taster said. Aromatic and easy-drinking, with a breezy 4.5 percent ABV, this is a crushable, beautifully made pale ale. You can taste the second-round dry hopping with bright, zesty notes on the finish. It’s versatile and crowd-pleasing. “I would drink this with a hot dog in the backyard, and I would drink it at a dinner party with roast chicken,” one taster commented. “It’s the ultimate summer beer,” said another. We’ll drink to that.