Low- and no-alcohol beers may be drops in the proverbial bucket of total U.S. beer sales, but the market continues to explode with options as the category continues to expand. According to the IWSR, in 2022, the no- and low-alcohol category surpassed $11 billion, with the N/A beer and cider category expected to contribute nearly 70 percent of the category’s overall growth over the next four years.

We tasted beers from dozens of brands to determine the best non alcoholic brews available right now. Whether you’re a pale ale or an amber fan looking for caramel malty sweet notes, a tropical-flavored hop lover with an affinity for hard seltzers, or a dark chocolate peanut butter stout aficionado, the variety of options, flavors, and use cases abound.

Here are 22 of the best non-alcoholic beers to drink right now. 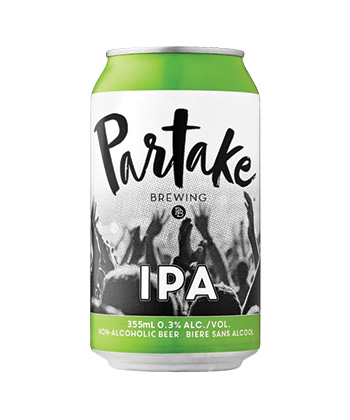 ​​At its worst, a non-alcoholic IPA tastes like wet cardboard. At its best, it tastes like IPA. Partake IPA falls into the latter category, with the appearance, aromas, and flavors reminiscent of an old-school West Coast IPA. It pours a deep orange color with a caramel-scented nose. On the palate, it’s crisp and flavorful, and almost gives the impression of malty sweetness but actually is quite bitter, and pleasantly so. The brand’s radler — a non-alcoholic blonde ale mixed with citrus — is also a worthy purchase. 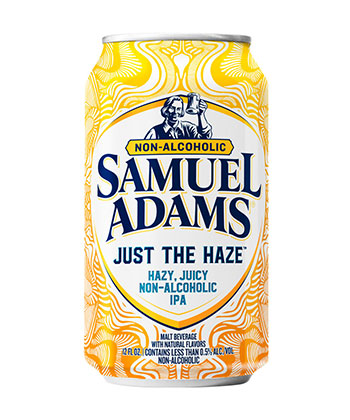 Just the Haze delivers on visuals: It’s bright yellow-orange, nearly as opaque as orange juice, and topped with a frothy head. On the nose, it’s malt-forward with a ripe banana note; and the flavor is fruity and juicy with a spicy hop finish. Truly, it’s not so different from Samuel Adams New England IPA. 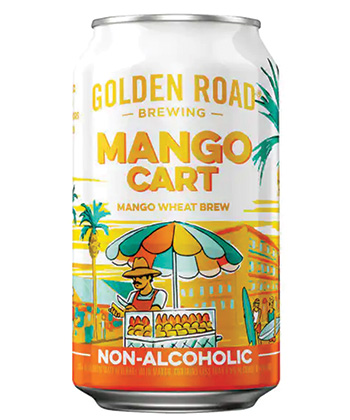 A sunny, hazy yellow sight in the glass, this alcohol-free wheat ale is all mango from start to finish: scented as sweet, ripe mango dripping down your chin; fresh mango flesh flavor; and so fruity, it’s like drinking sparkling mango juice with a hint of wheat on the finish. This could mix nicely with blanco tequila or vodka. Candy-scented, light-bodied, and very refreshing, Brooklyn’s first N/A IPA is both citrusy and herbal on the palate. The citrus notes are candy-like (think orange Skittles) accompanied by traces of dried herbs, such as sage and thyme. Though the aromas, flavors, and ultra-light body are not fooling anyone in terms of being an IPA, it does evoke tropical lime seltzer. 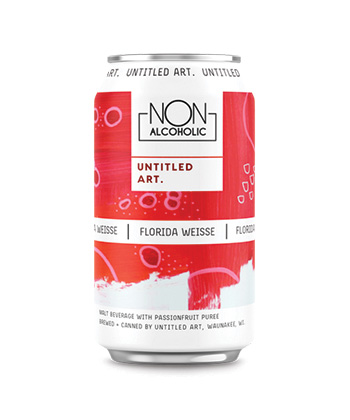 Coral-pink and exceptionally aromatic, Florida Weisse, a non-alcoholic version of an Untitled Art beer by the same name, is remarkably similar to a fruited Berliner Weiss-style sour ale. Its guava, strawberry, and passion fruit aromas are so prominent, we salivated from its scent alone. Taking a sip is like biting into a real, sour, seedy passion fruit. This is an unexpected, delicious addition to the N/A sour beer game. Untitled Art’s West Coast and Juicy IPAs are also stellar options. 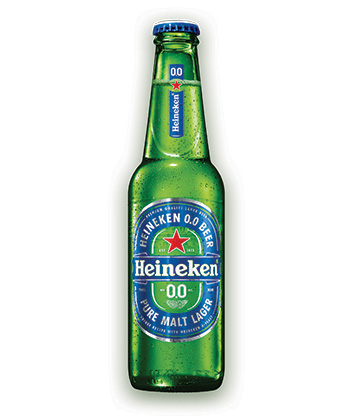 A star of non-alcoholic beer tastings every year, Heineken 0.0 holds up its reputation yet again with the simple fact that it tastes, smells, and feels like drinking a Heineken. 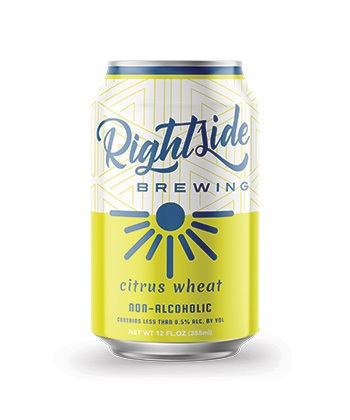 Soft, citrusy, and lemon-scented, this tastes so much like a lemony American Wheat Ale, we had to double check the label — then triple check, too. (Confirmed: less than 0.5 percent ABV.) It’s one of the best N/A beers we’ve tasted — and one of the best beers, period, that we’ll be drinking this summer. 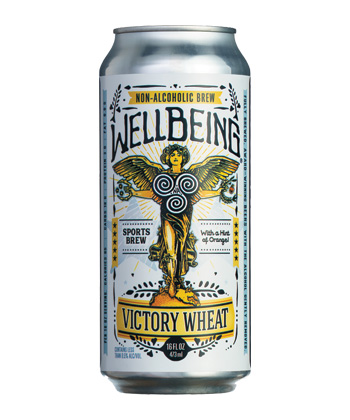 Printed on this impressive 16-ounce tallboy can is the short description: “Sports brew with a hint of orange.” It’s not a hint: It’s orange. On the nose and palate, we get orange water, orange blossom, and grapefruit. It is lighter than light, even for a near beer — like orange sparkling water to crush on a hot summer day, or as one taster said, “When you’re at a cookout and want another beer, but also want to pace yourself.” On a second tasting, we discovered it is made with electrolytes and other nutrients added for post-sweat refreshment and replenishment. 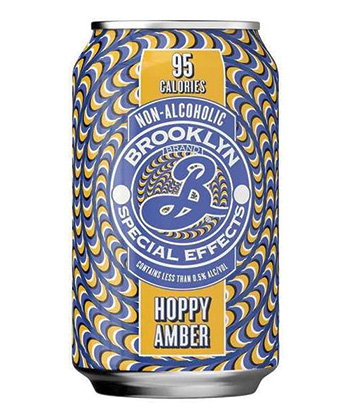 Brooklyn Brewery’s Hoppy Amber was one of the first non-alcoholic beers on the market, and then as now, it’s one of the best. It smells like a brew day — milled grain, sweet wort — and has black tea notes on the nose and palate. It’s still very light in comparison to an amber ale at full strength, but it’s a worthy substitute at only 95 calories. A non-alcoholic beer pioneer that’s now exported to more than 50 countries, Clausthaler offers an aroma of freshly milled grain, followed by balanced malty and bitter flavors on the palate. The nuance of this beer is expertly complex; it’s a little sweet at first, but a wave of flavor comes in for the finish. 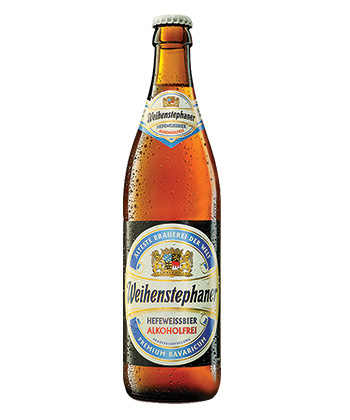 The best thing about alcohol-free Weihenstephaner is this: It is still Weihenstephaner. The centuries-old Bavarian brewery has produced its Hefeweissbier since the 1500s, and its NA version lives up to its legacy — it has all the flavor and distinct banana ester aroma we expect, and a short, bitter finish. It could pass for Weihenstephaner light. 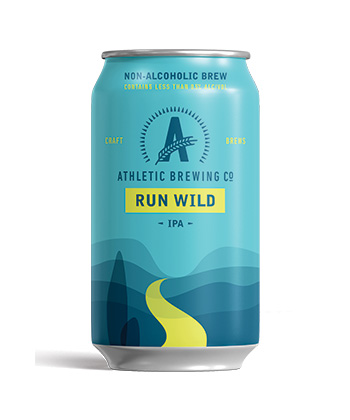 As soon as this can cracks open, hop aromas burst into the atmosphere. In the glass, it’s a hazy golden color, and on the palate it’s light, bright, and softly carbonated. Fresh, clean, balanced, and bitter without any lingering bitterness, it’s no wonder Run Wild is the brewery’s most decorated label. Stout lovers looking for a short respite from bourbon-barrel-aged or s’mores-flavored pastry stouts (which, of course, have their time and place) will massively appreciate this NA offering from Athletic. It’s chocolaty, roasty, and marshmallow-y yet feather light, and a good one to keep in rotation. 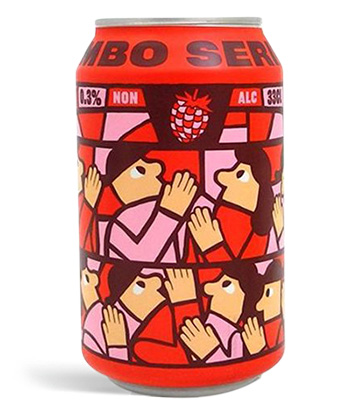 Ripe, fresh, and deliciously tart raspberries dance across the palate in this exceptional release from Mikkeller. Where a non-alcoholic sour could easily taste like carbonated juice, this brew maintains great viscosity and holds its weight without any funky aftertaste. If sours aren’t your style, Mikkeller also makes a great non-alcoholic wheat ale that’s worth checking out. For those looking to break into the IPA category but don’t want to be overloaded with a hop bomb at first sip, this hazy is a wonderful place to start. The nose is inviting, carrying aromas of lively, bright orange peel with a juicy and punchy palate delivering the same zesty flavors. The beer has a nice, long finish, which is unexpected, but entirely welcome, from the non-alcoholic category. 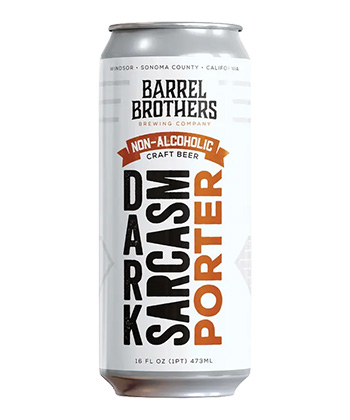 Another great offering from Barrel Brothers, this porter alternative welcomes you in with aromas of freshly roasted coffee, toasted chestnut, and rich dark chocolate. The same flavors then splash across the taste buds before settling into a long and satisfying finish. 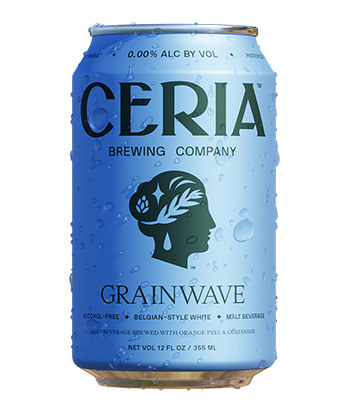 For a classic flavor meant to appeal to the hazy IPA drinker, this N/A release from Two Roads Brewing Co. is earthy with fascinating depth unexpected from a beer entirely sans alcohol. The palate delivers exactly what you want from an IPA: fresh, piney hop flavors with a long, pleasantly bitter finish. 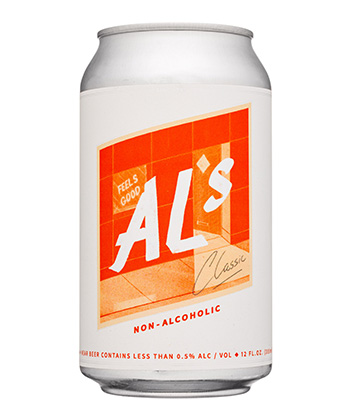 If you’re looking for a non-alc selection to replace your favorite macro lager this January, this is the one for you. Aromas of malty breakfast cereal meet hints of cinnamon and baking spices, while the palate stays light and refreshing with a nice weight and mouthfeel. Grab a case of this one, you’ll want to crush a few. Where an IPA sans booze could easily become unbalanced and hop heavy, Karbach’s Free and Easy maintains wonderful balance and bright, juicy aromas and flavors. Grapefruit and tropical fruits blend on the nose that follow on the palate that’s exceptionally elevated by grapefruit essences. The finish is nice and long, conveying the bitter finish desirable from a classic IPA. 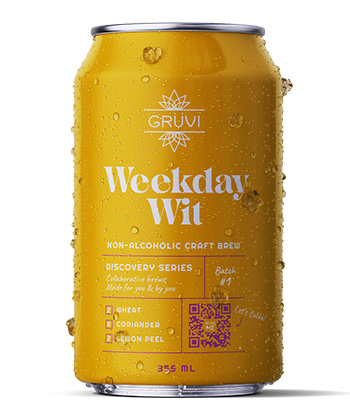 Though originally developed as an accompaniment for those who prefer cannabis consumption, Grüvi has fully expanded into a N/A beverage company with beer, wine, sangria, and more. Weekday Wit, the brand’s take on Belgian-style wheat beer, is lively and inviting yet complex and delicious. Notes of lemon peel and coriander arrive on the nose and the palate delivers a slightly sweet, vanilla-like essence while remaining balanced with citrus and slightly spiced notes on the nose. If you were to blind taste this wonderful brew from Bravus Brewing Company, you’d never guess that it’s non-alcoholic. Both the nose and the palate deliver dark chocolate, hazelnut, and peanut butter flavors with a creamy and luscious mouthfeel similar to that of high-ABV Imperial stouts. Rich and decadent, Peanut Butter Dark is sheer decadence in a can.

What are the 5 best selling non-alcoholic beers? (By Sales)

Is it OK to drink non-alcoholic beer regularly?

As with anything else, non-alcoholic beer is OK to drink in moderation. Though non-alcoholic beer may not contain alcohol and provides an alternative to regular beer, it offers very little nutritional value and should therefore be avoided in excess.

Are all non-alcoholic beers totally alcohol-free?

No. In the U.S., beer containing less than 0.5 percent alcohol can be labeled alcohol-free. If you’re looking to steer completely clear of booze, be sure to read the label closely before consuming.

Throughout the year, VinePair conducts numerous tastings for our popular Buy This Booze column and beer, wine, and spirits reviews. Our mission is to provide a clear, reliable source of information for drinkers, providing an overview applicable to day-to-day buying and drinking.

Tastings are not typically conducted blind. In alignment with our reviews mission, we believe in purposefully tasting all products as our readers typically would, with full knowledge of the producer and the region.

For this roundup, we considered a number of different factors before finalizing the list. Our aim was to provide a comprehensive picture of the ever-growing non-alcoholic beer category and as many varieties available today. Ultimately, we wanted to highlight the beers we’d reach for given the chance of choosing any, even if from the same producer, in different styles. We are confident that every product that made this final list delivers on flavor, balance, depth, and complexity, and would provide the best drinking experience possible in the non-alcoholic beer category.