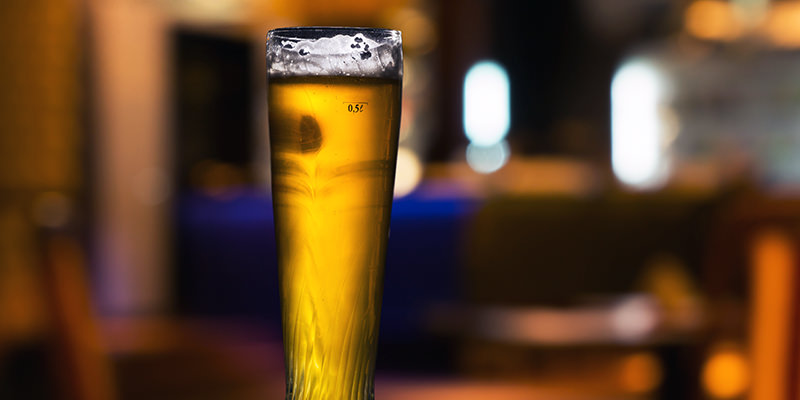 But when you want to drink, Predator quotes are generally meaningless. Actually, we hope to god they’re meaningless, because it would be terrible if they were pertinent after you crack a beer and kick your shoes off. As for the simplicity of lager, we can all sit back and enjoy that. Until we realize there’s such a thing as Pilsner. And then things get weird.

They get a bit weird because pilsner is a kind of lager. Great. So what actually differentiates the two?

Lager is the type of beer that you probably drink the most of.

Even though lagers make up the majority of the worst beers in the world, according to RateBeer.com, they’re also what we tend to drink a ton of. Think Budweiser, Miller, Coors. Big names—huge companies—that began with immigration.

You have the mid 19th Century to thank for Bud.

Sort of. German immigrants flooded the states in the 19 century, bringing with them a lager style of beer that the Americas weren’t really familiar with. That beer style was lager, and lager was about to seduce all of us.

Yeah, it sounds like a fart joke, but it’s actually a highly specific chemical reaction that has to do with a certain type of yeast enjoying a long, slow, cold chow-fest. Lager (including Pilsner, but we’ll get to that) is cold-fermented, meaning the yeast eat in colder temps, more slowly, at the bottom of the barrel. The result is a lighter, “cleaner” (less complicated) flavor.

Lager has fewer phenols and esters than ale, but it isn’t one-dimensional. It’s sleeker, crisper, and generally lower-malt, but lager doesn’t necessarily mean no flavor. See/drink Pilsner for more info.

The Pilsner category is the result of a mass beer dump.

Sure, the words “mass beer dump” freak us out, too. But imagine counting on beer in the mid 19th Century, waiting for it to ferment, only to have it taste spoiled. Pilsner didn’t come about as a stylistic choice. It was the only option after the citizens of Plzen dumped 36 casks due to spoilage. They wouldn’t have had to dump that beer if they had done something to mask the spoiled taste.

Pilsner was invented by one guy.

Josef Groll was brought in from Bavaria to help the Bohemians with their spoiled beer troubles. His solution: Saaz hops. And that’s what defines the Pilsner category, to this day.

Pilsner is a lager that’s been corrected, with the addition of hops.

Hops are like spices. You can have a generic (and highly quaffable) lager made with readily available hops that have no role in the character of the beer. Pilsner beer, on the other hand, came about because Jo Groll (we’re buddies) incorporated Saaz hops. The result…

Pilsner is “spicier” than your typical lager.

We don’t mean “hot” and we certainly don’t mean “pumpkin pie spicy” (there’s plenty of beer to cover that). Saaz hops have a kick to them, a bit of a harder bite than you’ll get out of your typical Budweiser or any of these beers.

Basically, Pilsner is lager turned up to 11.

Saaz are “noble” hops for a good reason. They’re kind of all encompassing, busting with flavor, bringing some earthiness along with that spice, plus some florals and green flavors. That’s why every Pilsner doesn’t taste like every lager.