Created in the 1970s when the U.S. bourbon industry was questionable at best, Eagle Rare 10 Year helped change the spirit’s reputation and forged a path for the spirit to become the darling it is today. The Eagle Rare brand has expanded to include several different labels, each adored by bourbon lovers around the world.

Produced and distilled by Buffalo Trace, Eagle Rare bourbons are some of the most sought-after bottles on the market. Aged for no less than 10 years, each barrel used to age Eagle Rare is hand-selected to offer consistent flavor from batch to batch, but also to showcase each batch’s unique flavors and aromas. With a complex nose bringing forward notes of toffee, orange peel, herbs, and honey — balanced with delicate aromas of leather and oak — Eagle Rare has a bold taste that’s become a favorite among bourbon connoisseurs. Now that you know the basics, here are 10 more things you should know about Eagle Rare Bourbon.

Eagle Rare was launched at a time when America was turning away from whiskey.

Throughout the 1970s, a new generation of drinkers began turning their backs on the spirits their parents drank. As such, rather than opting for whiskeys or bourbons, they found clear, unaged spirits like vodka to be more their style. In response to declining demand, the bourbon industry responded by lowering prices, which further damaged the spirit’s reputation as a “cheap” liquor.

When demand was low, Charles Beam, master distiller of Four Roses Bourbon, saw an opportunity to produce and sell more prized, and thus more expensive, products. As such, Eagle Rare was launched in 1975 under its original name, Eagle Rare 10 Year, as a means of reintroducing bourbon as a luxury spirit. Despite the fact that the ‘70s and ‘80s were tumultuous times for the whiskey industry, Eagle Rare managed to survive and build the foundations for its rise.

For the creators of Eagle Rare, whiskey ran in the family.

If the name Charles Beam sounds familiar, it’s because he belonged to the same family as whiskey icon Jim Beam. Charles was the grand nephew of James Beam, who ran the brand Jim Beam from 1894 until Prohibition. Prior to working in the bourbon industry, Charles was a member of the United States Army Air Corps in World War II and flew 30 missions across Europe, earning himself the Distinguished Flying Cross. After the war, he began working at Four Roses Distillery, under ownership of the Seagram Company, and became a master distiller after just six years.

In the 1970s, when bourbon production was low, Wild Turkey remained a widely beloved brand. With a lengthy time commitment necessary to produce a 101-proof bourbon, plus an eight-year age statement, Wild Turkey was a fine bourbon existing in a market that was not nearly as sought after as it is today. While many believe that Eagle Rare was launched as an homage to Wild Turkey, competitor may be the more operative term. Both bourbons were 101 proof and both have bird-related names. Further, it’s believed that the 10-year age statement on every bottle of Eagle Rare was a sly way to one-up Wild Turkey.

The brand changed ownership when it was purchased by Sazerac.

A little over a decade after Eagle Rare hit the market, the brand — along with Benchmark Bourbon, another one of Beam’s creations — was purchased in 1989 by the Sazerac Company, which was looking to add a network of bourbons to its arsenal. As Sazerac did not yet have a distillery of its own, Eagle Rare bourbon was produced at Heaven Hill Distillery until the company acquired the Buffalo Trace Distillery three years later. Eagle Rare has been produced on the Buffalo Trace Distillery’s campus since 1992. This distillery was chosen due to its close proximity to the Kentucky River, which supplies the distillery with water filtered by limestone, allowing for iron to be filtered out and creating sweeter mineral water.

While Eagle Rare was first launched as a 101-proof liquor, the bottling proof was lowered to 90 in 2005 and instead began marketing itself as a single barrel bourbon. In 2012, the bottle was redesigned, moving the 10-year age statement to the back of the bottle. Additionally, distillers at Buffalo Trace were forced to remove the phrase “single barrel” from each bottle thanks to a newly installed automated bottling line. The removal of the single barrel notation eliminated any potential for the brand to face legal trouble with the U.S. Tobacco and Alcohol Tax and Trade Bureau (TTB), which upholds a strict list of requirements for any spirit advertised as single barrel.

Part of the appeal for each bourbon under Buffalo Trace’s umbrella is the mystique surrounding each of the brands’ mash bills. While the exact recipe of Eagle Rare remains undisclosed, it is known that the bourbon is a member of Buffalo Trace’s Mash Bill #1, which has been reported to contain approximately 10 percent rye. Other bourbons in this mash bill family include Buffalo Trace’s namesake bourbon, Benchmark, and E.H. Taylor.

In order to receive a certified age statement from the TTB, bourbon producers must track the maturation process of each of their barrels throughout the aging process, and each bourbon must be aged in new American charred oak barrels. As such, Eagle Rare uses white oak No. 4 “alligator char” barrels for each of its whiskeys. Before they house whiskey, each barrel is exposed to a flame for one minute to add a char to the wood. This open flame leaves behind deep ridges in the wood, which mimic the ridges on an alligator’s back. Once the aging process is complete, distillers ensure consistent flavor from one barrel to the next via a taste test to be positive that the liquid, and thus the barrel it was aged in, meets its strict standards.

There are three Eagle Rare expressions to choose from.

In addition to Eagle Rare 10 Year, the brand also produces Double Eagle Very Rare and Eagle Rare 17 Year. Double Eagle Very Rare is an extremely limited bourbon aged for 20 years and bottled with a unique letter of authenticity. Packaged with a crystal decanter in a silver box that lights up when opened, Double Eagle is a luxuriously balanced bourbon with notes of vanilla, toasted oak, and caramel. Eagle Rare 17 Year is another prized bourbon, aged for 17 years and released in small quantities each fall. The bourbon carries a nutty, savory aroma with baking spice notes on the mid-palate.

Each Eagle Rare bourbon is distributed as an allocated spirit, meaning distributors are not able to place orders on demand when they are running low on stock as they would with a typical spirit. As such, acquiring a bottle of any Eagle Rare bourbon can prove harder than one may think — and despite the fact that Eagle Rare 10 Year is accompanied by a suggested price tag of around $40, its off-market value is much higher, with some bottles on Drizly marked up to $150. Additionally, each bottle of Eagle Rare 17 Year retails for around $99 from the source, but online resale values for the same bottle can shoot up to $2,500. Bottles of Eagle Rare Double Eagle Very Rare, which typically retail at around $2,000, can sell on the secondary market for over $25,000.

Eagle Rare was a victim of a seven-year heist carried out by former employees.

In 2008 — aware of the extreme off-market values for Eagle Rare bourbons — then-Buffalo Trace Distillery employee Gilbert Curtsinger set out with a plan. Over the course of the next seven years, Curtsinger, along with eight other individuals, stole an exorbitant amount of bourbon from the distillery, selling it on the secondary market to turn a major profit. Their haul included 28 bottles of Pappy Van Winkle, each of which can sell for over $1,400, as well as 20 barrels of Eagle Rare bourbons, which amounted to $100,000 worth of the spirit. One of the barrels reported stolen was one containing Eagle Rare 17 Year, valued between $11,000 and $12,000.

The group went undetected until 2013, when 65 cases of Pappy, amounting to nearly 200 bottles, were reported missing from the distillery. They weren’t caught until 2015 when an anonymous tip was sent in to the authorities alerting them of Curtsinger’s actions. He was promptly arrested after five barrels of stolen Wild Turkey were found in his home. In 2017, Curtsinger pleaded guilty to the crime and was sentenced to 15 years in prison. He was released after just 30 days and placed on shock probation that’s set to end in 2023. 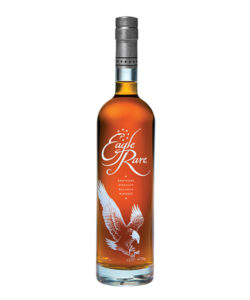 Eagle Rare 10 Year:
Comparisons with this bourbon's 17-year-old elder sibling are lazy and focus on what it's not, rather than what it is. This is a ...